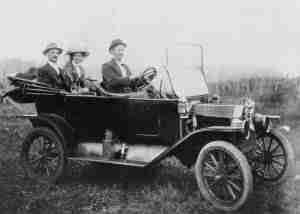 When looking into the effects of job automation and the increasing power of artificial intelligence over the jobs market, one cannot help but make comparisons to history. In this instance there is a lot that modern society can learn about the automation of jobs from the 1920s, specifically the innovation of the production line and Henry Ford.

At first glance, you would be forgiven for assuming that there is little similarity between two periods separated by a century. However, reading the literature at the time, similar fears about mass unemployment caused by the automation of workflows were widespread. In hindsight the 1920s are seen as a time of economic prosperity, whereby the average family was better off and the jobs market was stronger than ever.

Both the Fordian assembly line and AI are tools for increasing efficiency within the workplace, and made previously laborious and manual tasks redundant. But the 1920s did not undergo a mass unemployment disaster, instead whole new sectors arose surrounding the automotive industry both directly and indirectly.

Before Henry Ford’s innovation the average American family could not afford a car, which meant that people did not tend to travel as much or as far. By the time of the 1920s families began to take holidays across the country, which meant there was a higher demand for roads, garages and bridges. This led to increased spending on infrastructure throughout the decade, with $14 billion (adjusted for today’s value) being spent on roads alone, creating thousands of jobs in the construction industry. Meanwhile whole new roles were created as mechanics, drivers, station attendants and many more appeared during this period.

In the 2020s with the need for faster and faster internet connections in order to support big data, artificial intelligence, the decade could see huge investments in laying down the necessary infrastructure across the world. Again, creating millions of jobs in construction and other roles directly related to supporting AI, in the future perhaps we will be holding job titles such as: Cloud Psychological Engineer or Human/Robotic Resources Manager.

The reduced costs and streamlining that factories underwent meant that items could be produced on a scale never seen before. This meant the average working day was decreased, Ford was notable in also closing his factories on Saturdays and Sundays. While this extra free time might seem counterintuitive to economic success, the reverse happened.

With more free time families had greater levels of freedom for leisure. This spurred a plethora of new activities ranging from golf to cinemas, which were previously too time consuming for mainstream appeal. In fact the demand was so high for recreation that by 1930, 95 million cinema tickets had been sold in the US. Again this fuelled an economic explosion as businesses began to fill the demand.

The 2020s, could see an even larger explosion in industries indirectly related to AI, with remote working, freelancing and the historical trend of shorter and shorter working weeks. The increased demand for leisure has a knock on effect with other industries in all sorts of unexpected ways, e.g. more people staying at hotels means more people are required in the textiles industry to create more towels. Who can predict what whole new industries will be born out of the rise of artificial intelligence?

Ultimately, those who prospered the most from the sweeping changes of the 1920s were those who kept their skillset mobile and could adapt to the changes. If anything is guaranteed, the 2020s will be no different. In fact due to the increasing rates of technological disruption, upskilling is not just a once in a lifetime change but a constant progression throughout the average person’s working life.

K2 University was created as a way to tackle the issues of the skills gap, and allow people to stay up to date in the latest technology.

Looking for a way to get your staff officially certified? See here for details. If you’re a client looking for help staffing a project contact us.